RDT Performance in Kanab – Back by Popular Demand

Repertory Dance Theatre (RDT), the nation’s oldest and most successful modern dance repertory company, will be performing a concert at 7:30 PM on January18, 2020 at the Kanab High School auditorium.
Founded in 1966 in Salt Lake City, Utah, RDT is a professional dance repertory company dedicated to the creation, performance, perpetuation and appreciation of modern dance. Known worldwide for its collection of dance treasures, RDT is both a museum and contemporary gallery representing the scope and diversity of modern dance, past and present.
From the early pioneers of the art form to today’s cutting edge choreographers, the company maintains one of the largest collections of modern dance classics in the world.
On January 18, the eight RDT dancers will present a concert filled with variety called Excursion featuring work from its classic and contemporary dance library.
Desert Tryptic was created using music by Utah’s 3hattrio. Hal Cannon, Eli Wrinkle, Greg Istock play what they call American Desert Music, inspired by their homeland near Zion National Park in Utah. The Trio has tours internationally, is known for creating and performing music that is truly American …and also new.
Invention by Doris Humphrey is a masterpiece created in 1949 by one of the founders of modern dance. This exquisite work (for 3 dancers) reflects a man’s point of view as he encounters two different women who represent different elements in his life.
Lar Lubovitch is a contemporary artist whose highly technical choreography and deeply humanistic voice have been acclaimed worldwide. His dances are renowned for their musicality, lush movement and their rhapsodic style. Something About Night is set to beautiful music by Franz Schubert. This stunning work was composed using fragments of many dances Lar has choreographed over the years. But mainly, his motivation was to create a sense of “quiet.”

Outdoors is a new work by Noa Zuk and Ohad Fishof who are internationally known choreographers from Tel Aviv, Israel. This contemporary, tribalistic, pattern-piece is filled with quirky invention and laced with rhythmic humor. The work is a spirited, high energy piece that will bring audiences to their feet.
The concert is sponsored by the Center for Education Business & the Arts (CEBA) and the Utah Division of Arts and Museums. For further information contact CEBA Executive Director Kelly Stowell at stowell@kanab.net. 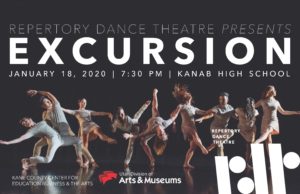