Staying Safe and Rockin’ Out!

On July 24th and 25th Kanab will host the first two-day Kanab Music Fest, featuring 10 different Utah- based artists at the Jacob Hamblin Park from 5 p.m.- 10 p.m. each night. This first year, the concert is free of charge.

On July 24th and 25th Kanab will host the first two-day Kanab Music Fest, featuring 10 different Utah-based artists at the Jacob Hamblin Park from 5 p.m.- 10 p.m. each night. This first year, this family-friendly concert is FREE of charge.

This two-day music fest will facilitate social distancing, high hygiene standards and mask wearing when social distancing is difficult. There will be two stages and two large-screens to allow the attendees to spread out and sit with their family groups in the park and enjoy live music.

Friday will feature country, folk and bluegrass artists and Saturday will feature more rock bands. All bands are appropriate for a family audience, so all are welcome to come enjoy music in a beautiful setting.

The event will be held in the beautiful Jacob Hamblin Park (566 North 100 East), nestled in the iconic red rocks of Kanab. Food trucks and craft vendors are welcome. There is no fee, however space is limited. To reserve a spot, contact Lannell Dove, ldove@kane.utah.gov or fill out the Vendor Form Here.

The event originator, Ted Hinckley, came to Kanab with several student bands in February for the Balloons & Tunes Roundup and realized that Kanab would be a great location for a music festival, with protocol and infrastructure already in place to allow for a great outdoor concert under the new guidelines. Hinckley is integrated into the music scene and sees a pent up need for artists to perform after all of the restrictions and a great desire for live music for concert goers.

Kane County Office of Tourism and Kanab City Arts Council are events co-sponsors of the event.

Don’t miss the fireworks show at 10:30 PM on July 24th at the Jackson Flat Reservoir (725 E Kaneplex Dr., Kanab, UT) in honor of our Pioneer heritage. 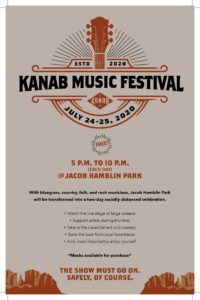 See the full band line-up below! 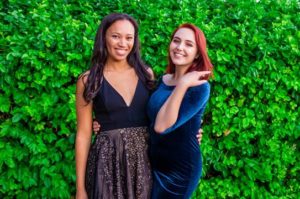 Faith Read and Olivia Sham are two singers who met in the Musical Theatre program at SUU and have since learned they love to perform together. Backed by a seasoned band, Faith and Liv are sure to put on a fun, high energy show everyone will enjoy! The enthusiasm and passion these two seasoned stage performers share with one another is hard to miss! 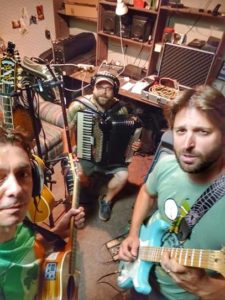 1. A dynamic collective of creative individuals with a shared fondness for old, lasting and/or timeless people, places, things and ideas.

2. The immediate, physical presence of earthy or mineral matter.

3. A “potato music“ trio (the potato being the queen of all roots) featuring multi-instrumentatlists Jon Stone, Byron Owens and Josh Baird . Stone Company plays an upbeat blend of Euro-American roots music with a groovy twist. Stone Company is headquartered in Southern Utah. 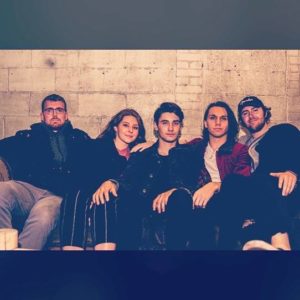 At the core of this band’s sound, their music features powerhouse vocal harmonies, shimmering guitar melodies, sprinkled in with subtle synth lines. With the similar likes of bands like Hippo Campus, Fleet Foxes and Amber Run, this young band shows great promise, sparking buzz around the SLC valley with their debut EP “Glow”. 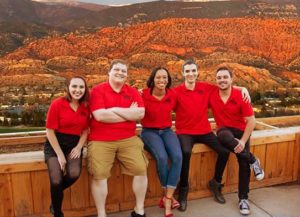 SUU Red Rockers were formed at Southern Utah University to play at on campus celebrations and sporting events.  Existing for two school years their popularity has grown way beyond the campus,  performing at events in Kanab, Panguitch, Spring City, and In Salt Lake City.  The Red Rockers play a variety of styles, and enjoy each one. The Summer 2020 version of the Red Rockers is performing in the country/rock genre who do sets with electric and acoustic set-ups. 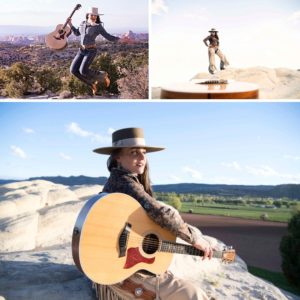 A multiple award winning entertainer, Mary Kaye tours extensively throughout the United States and Canada with her unique brand of western roots music. Her music is a mix of western folk, traditional, Americana, and western swing. She is a native born Texan and as a young woman ventured off to Utah and now resides in the small western town of Escalante, a 140 year old ranching community in southern Utah. The authenticity of her music emerges from her life of mothering cowboys, wranglers, and rodeo sweethearts; caring for livestock, and living in one of the most remote places in the Western United States. Mary Kaye combines traditional trail songs with fresh, contemporary material, and award winning originals.

Renowned western artist Maynard Dixon declared, “The spirit of the West sings in every soul.” Mary Kaye believes this and shares this spirit in every performance. Her music is rooted deeply in the Western landscape her life is immersed in. The critics have been prolific with praise for Mary Kaye’s singing and songwriting. Western Horseman said of her, “Some Western singers and musicians are all about preserving traditional cowboy songs. Others strive to write and sing songs about contemporary cowboy life…Mary Kaye does both well, and with an authenticity that appeals to not only purists, but also those seeking something fresh. 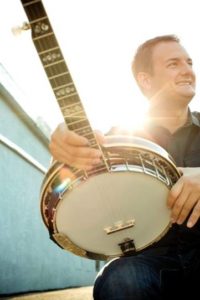 Ryan Tilby is a multi-instrumentalist and audio engineer known for his broad palette of sounds and styles. Tilby is a Utah state champion on banjo, guitar and mandolin as well as a winner of the Telluride Bluegrass Festival band competition. He has performed in forty-nine states and ten countries, and his music has been featured on Duck Dynasty, the Discovery Channel and on Outdoor Photo Adventures. Most recently, his projects include a fifth solo album called Hymns of the New World,  live touring, and teaching at Tuacahn High School for the Arts. 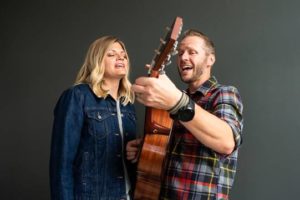 Drew & Lacey spent the last ten years immersed in the Nashville music scene. The couple spent time on music row recording, writing and collaborating with top musicians; but Drew & Lacey truly shine when they are on stage. Their stage presence is dynamic and magnetic. It was this magnetism that allowed them to sell out the Rutledge live music venue in downtown Nashville for six years in a row. In a town where live music is notoriously saturated, the buzz created from the duo’s live show was unique.Drew & Lacey have worked with Dillon Hodges (firekid), Mark Evitts, Michael Hinckley, Due West, Peter Breinholt and many more. Since moving to southern Utah, for Drew to be the principal at Tuacahn High School for the Performing Arts, the duo has continued to play music. They were resident musicians at the OC Tanner Amphitheater in Zion, Utah for the summer of 2016, and have opened for Jay Leno and the Steep Canyon Rangers at Tuacahn Amphitheater. Drew & Lacey’s latest album Most Likely, was produced by Scott Wiley at June Audio in Provo and is available on all music platforms. 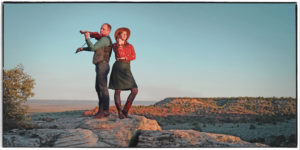 The W Duo, Lyndsey and Russell Wulfenstein, played music together on their first date and have been making music ever since. Their roots are founded in folk music with an emphasis on relatable experiences with fascinating instrumentation and arrangements.

Russell is a multi-instrumentalist and song-writer who has won state championships on fiddle, mandolin and guitar. Lyndsey is not only a gifted vocalist, but also brings her extensive dance background, as a former BYU World Dance instructor, to the stage with traditional footwork woven into the show. The two have had the pleasure of performing with various ensembles in 16 countries and throughout much of the United States.

Lyndsey and Russell both grew up performing old-time music. Russell was raised performing with the Utah Old-time Fiddlers as well as his family band. Lyndsey sang her first solo at age 4 for the town 4th of July celebration and spent her summers singing and dancing for tourists. Lyndsey has played the leading role in several musicals including Annie Get Your Gun, Mary Poppins, Always… Patsy Cline, and their original shows, Home for Christmas and Country Legends. Together, the two bring to life sounds of the past with modern theatrical appeal.
You can connect with The W Duo on facebook (www.facebook.com/thewduo) and subscribe on YouTube (https://www.youtube.com/channel/UCQ2VEbSTVlyaNFLMA-7-kIQ) to sample their unique musical stylings. 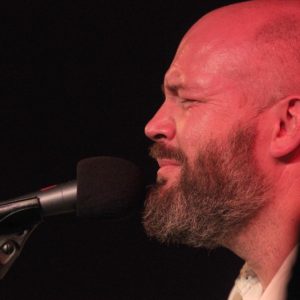 Matt Harding is a very versatile person. He has been a middle school teacher in New York City, the owner of the Cotton Club, a jazz club in Shanghai, China and a missionary in the Philippines. But this native
of Orem, Utah is first and foremost an artist. His music is influenced by folk, pop, blues, jazz, country and reflects his travels through
Asia, Europe, South America and Africa. His unique and eclectic style of “Americana” can be described as a cross between JJ Cale and James Taylor at a World Music Festival. Harding’s song writing prowess and vocal talents have been praised by well known artists such as Taj Mahal and John Lee Hooker.

The Old Birds is a folk group consisting primarily of Devin Knight and James McIntyre.  They take heavy influence from Jason Isbell, David Ramirez, Joy Williams, The Milk Carton Kids, Devin’s ex wife, and James’ plethora of lost loves. They most often appear just the two of them, but when they need to get loud KC Hooker joins them on the bass and John Hancock takes the drums. 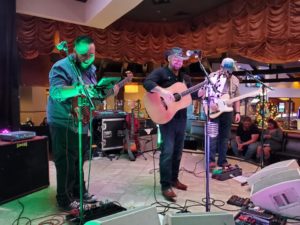 The Blake Mason Band is a Southern-Utah based Country/Rock Trio featuring Dennis Chavez, Steve Flaig, and Mason Cottam.  Armed with a great rhythm section and an eclectic variety of songs they have felt at home  on corporate stages and festival stages alike.